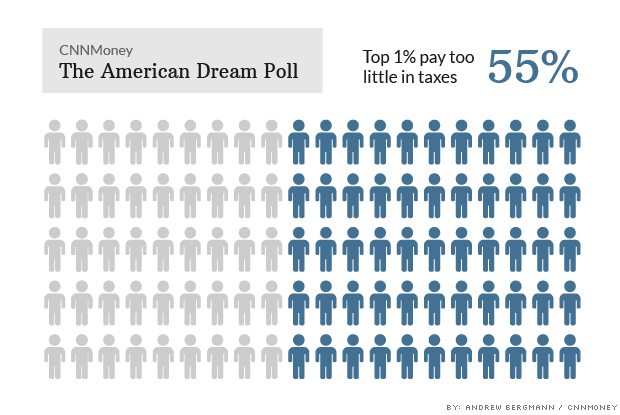 DO THE TOP 1% PAY ENOUGH TAXES? TOO MUCH?

The top 1% of households pay too little in taxes.

That’s the opinion of 55% of people surveyed in CNNMoney’s American Dream poll.

More women (61%) than men (49%) held that view.  And not surprisingly, so did more Democrats (77%) than Republicans (33%). Straddling the middle were independents, 52% of whom thought the tax burden of the top 1% could be higher.  Meanwhile, another 25% made up the Goldilocks contingent. They said the top 1% pay “about the right amount” in taxes.  And another 19% said they pay too much.

The truth about taxes, of course, is that what’s considered too much, too little or just right is a subjective, political judgment.  The facts about the top 1% — at least according to the latest data from the IRS and related analysis– are these:

It took at least $389,000 of adjusted gross household income (AGI) in 2011 to rank above the other 99% of U.S. tax filers. Of course, AGI doesn’t include tax-exempt income, which can be substantial for the wealthiest households and lower the taxes they pay as a percent of their overall income.

As a group, the top 1% earned nearly 19% of all AGI reported that year, but they paid 35% of all federal income taxes, which was about 2 percentage points less than the year before.  And many in the top 1% faced a higher tax bill starting in 2013 thanks to measures in the fiscal cliff deal and the Affordable Care Act.

Something else that’s becoming clear about the top 1% of tax filers?  Membership can be fleeting. That’s because a sizeable number of households are catapulted into the group thanks to one-time events, such as the exercise of stock options or sale of a business.